The Sunday Book Review of the New York Times ran an article yesterday by Lev Grossman on the place of the e-book in relation to the scroll and codex. Grossman outlines what he sees as the weaknesses in reading from digital books by pointing out its parallels with reading from a scroll:

Trying to jump from place to place in a long document like a novel is painfully awkward on an e-reader, like trying to play the piano with numb fingers. You either creep through the book incrementally, page by page, or leap wildly from point to point and search term to search term. It’s no wonder that the rise of e-reading has revived two words for classical-era reading technologies: scroll and tablet. That’s the kind of reading you do in an e-book.

Having himself authored a book entitled Codex, Grossman prefers reading from a bound product like the codex:

The codex is built for nonlinear reading — not the way a Web surfer does it, aimlessly questing from document to document, but the way a deep reader does it, navigating the network of internal connections that exists within a single rich document like a novel. Indeed, the codex isn’t just another format, it’s the one for which the novel is optimized. 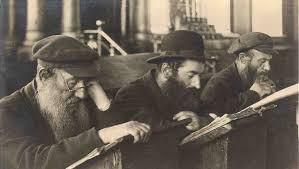 People studying Talmud, back in the day.

Which, naturally, leads one to think- “what about the Talmud?”. On the one hand, the book is almost uniformly studied from its Vilna Edition; on the other, its digitization has enabled unprecedented search capabilities which have furthered its study. To make it only more complicated, it seems as though the Talmud’s “authors”, whoever they may be, intended on an oral transmission. Some of the earliest genizah fragments of the Talmud are parts of scrolls, and although they probably saw codexes in the hands of Eastern Christians, the early disseminators of the Talmud could never foresee innovations such as the Vilna Sha”s, Bar-Ilan, or Ma’agarim. This preamble is just so that I can ask how you learn the Talmud- from printed book or computer screen, and why?

In related news, Mississippi Fred Macdowell has some helpful tips on “searching online in Hebrew with imperfect OCR“.

Finally, Yitz (not Landes) reviews the iMishnah app for iPhone and iPad over at Tzvee’s Talmud Blog. This Yitz doesn’t use iMishnah but is an avid iTalmud user. It’s well worth the money but I’m a little hesitant about iMishnah- it doesn’t promise much more than the free “ובלכתך בדרך” app, profiled here by Richard Hidary.

13 thoughts on “Some Notes and Questions on Digitization (Around the Web- September 5, 2011)”