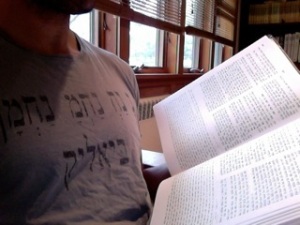 No longer just "the national poet", Bialik has become a fashion statement.

In the year 1903, C.N. Bialik and Y.H. Ravnitsky, neighbors in the same building in Odessa, set out to produce what would be one of the most influential books in the study of aggada since the Ein Yaakov. Sefer ha-Aggadah– The Book of Legends– was completed 100 years ago, with the publication of its sixth section in 1911.  To mark this anniversary, Ha’aretz recently featured an article (hat-tip– Ancient Hebrew Poetry) by one of the foremost Bialik scholars, Shmuel Avneri (not to be confused with Shlomo Avineri). Avneri lists numerous instances where Bialik’s books were burned by some ultra-Orthodox Jews in Israel, and he emphasizes how these cases were at odds with the positive and productive relationships which Bialik had with other segments of the charedi community. The author also lists numerous critiques of Sefer ha-Aggadah by secular and academic intellectuals, from Agnon to Shinan, who for the most part took issue with the liberal editing policies of Bialik and Ravnitsky. To his list I would add the important footnote in Carnal Israel in which Boyarin criticizes Bialik for his “misogynistic” selection of texts.

As a translation and anthology, Sefer ha-Aggadah has many problems, some of which Prof. Shinan’s own updated version will seek to correct. Yet no one can deny the massive contribution that it has made to the popularization of aggadah over the past hundred years. As Alan Mintz has pointed out:

Throughout the early twentieth century, cultural and religious Zionists sensed the need to make rabbinic thought available in formats and languages that were accessible to native Hebrew speakers, religious and secular alike. Sefer ha-Aggadah (The Book of Legends) by C.N. Bialik and Y.H. Ravnitsky was an early example, one that has profoundly influenced Israeli culture.

As attested by the reflections of several modern Israeli writers, Bialik and Ravnitzky had an enormous influence on the early generations of Zionists in Palestine/Israel. Yoram Kaniuk writes in his memoir 1948:

We were the sons of the Bible, yet we were also sons of Bialik and Ravnitsky’s The Book of Legends, and we loved to read how Moses sees Joshua enter the Tent of Meeting and is jealous of him and says to God “one hundred deaths and not one jealousy”.

More examples may be found in Amos Oz’s Story of Love and Darkness. Without such a compilation it is doubtful that Rabbinic literature would have succeeded in taking such a significant role in the formation of the Zionist ethos. One may add that Bialik’s position as “the national poet” also contributed to the work’s success.

Thanks to the translation of William G. Braude, Sefer ha-Aggadah has become a staple of Jewish learning outside of Hebrew speaking communities, as evidenced by such English language online learning attempts as Sefer Ha-Bloggadah. Through such forums, Sefer ha-Aggadah continues to enlarge the community of readers that engages Rabbinic texts, and promises to do so in the future as well.