Two  articles on redaction in the Tannaitic corpus that is not Mishnah were recently published. I thought that each exemplified an interesting facet of the reembracement of source criticism in recent years.

The first is Yoav Rosenthal’s article in Tarbiz 79, on an interesting phenomenon in the MSS of the Tosefta. Rosenthal’s work focuses on the “recent afterlife” of texts; something analogous to the search for “historical traditions about Jesus from the first 48 hours after resurrection”; although he contends that rabbinic works are in fact made of discreet sources, they are not always readily found. The only “rigourous” tools we have are the MSS, which rarely give away the secrets of actual redaction. They’re better at finding the first baby steps the text made when it was being transmitted.

In what might be his most influential work yet, Yoav Rosenthal brings to light some gems first discovered by Adiel Schremer. Rosenthal claims he has found footnotes in Tosefta, which become apparent when comparing the two extant MSS of this work. In some rare instances, a clump of halakhot will be found at the end of the chapter in one MS, and in the middle in another. Rosenthal shows that this clump of halakhot is a commentary on one halakha in the chapter of Tosefta that does not “move around” in the MS tradition, or an addendum to it.

This of course opens the door to the possibilities that (a) there are more such places, but they cannot be found in the MS tradition, and (b) that the Tosefta is made up of multiple layers, and that it was an open text for a certain amount of time.

This should be distinguished from true “redaction”, i.e. the creation of a new text out of sources already available to the redactor. This phenomenon was recently astutely detected in Tosefta Sanhedrin 7 by Ishay Rosen-Zvi, and deserves its own treatment.

A completely different take on the question of redaction is Steven Fraade’s “Anonymity and Redaction in Rabbinic Midrash”, published in the recently-noted Melekhet Mahshevet. In a conference conducted two years before Moulie Vidas suggested that the Stam was being anonymous on purpose, Fraade made the same observations regarding the anonymous material in the Mekhilta. Fraade notes that since Halivni and Friedman popularized the idea that the Bavli is made of different strata, very few scholars have attempted (in print, at any rate) to apply the same tools to other rabbinic texts.

Fraade suggests that it makes less of a difference whether or not the anonymous parts are earlier or later than the named ones, and that the bigger and more interesting task is to parse the effect this combination of multivocality and monovocality has on the reader. Do many names carry more or less weight than one text speaking with no names; and what is the effect of the combination?

In order to do this he read through a sizable chunk of Mekhilta nezikin, and presents the reader with a detailed discussion of parasha 4 in which he points out that the named statements in this midrash are “interlopers in a text that otherwise seems to glory in its anonymity”. He suggests that their names are presented in order to point out the partiality of the single opinions against the redacted text, brought into the debate to highlight the overarching anonymous pedagogical move that is Stam Mekhilta.

Fraade himself sees this article as the beginning of a project; as someone who is already laboring on several readings of parashot of midrash, his insight on the effect of the final redacted product on the early reader is an invaluable tool. I would, however, also focus on actual source criticism, which is easier to employ in Midrash, with all of its rules, terms and patterns, than in Mishnah, Tosefta or Talmudim.

In a way, this reading too is a study on the short-term afterlife of the text: what did the composer mean for the first audience to hear? What would the first – or third – teacher of this text transmit to his students? Are these questions better or are they in fact just a shying away from the old (“protestant”) questions of redaction and source criticism? 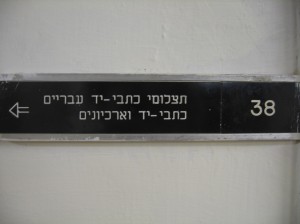 Arguably the most important room in Jerusalem

This is the first of what I hope will be an ongoing series on how to use the various internet databases listed in our “Toolbox” section. Dr. Ezra Chwat of the IMHM helped me put together the instructions listed below.

Arguably the most important room in Jerusalem, the Institute of Microfilmed Hebrew Manuscripts (IMHM) at the National Library of Israel only recently received the attention it deserves when it was featured prominently in Yossi Cedar’s film Footnote. Scenes of Professor Shkolink the father working studiously in the room’s dark lighting were more than enough to raise the excitement of philologists who for the first time truly experienced Lacan’s “mirror stage” through film. Yet so much of the information amassed by the Institute’s staff is accessible without having to deal with the odd lighting and clunky microfilm viewers. The catalog of manuscripts on its own holds a wealth of information, from the bibliographical to the codicological. The list allows you to find almost all of the textual witnesses available for the work you may be studying. For example, to find various manuscripts of Bavli Shabbat, all one has to do is click on “כותר המתחיל ב…”, and type in “תלמוד בבלי סדר מועד (שבת)”, and the catalogue immediately lists all of the complete and partial manuscripts of the tractate: 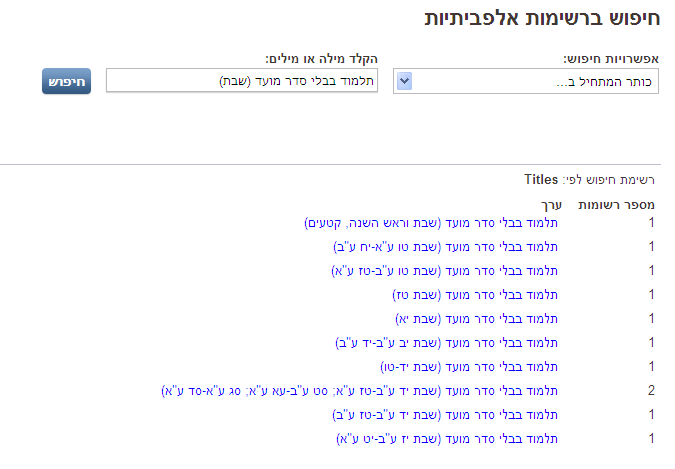 Even more importantly, the list already includes manuscripts reconstructed from various genizah fragments, with information about each part of the textual witness: 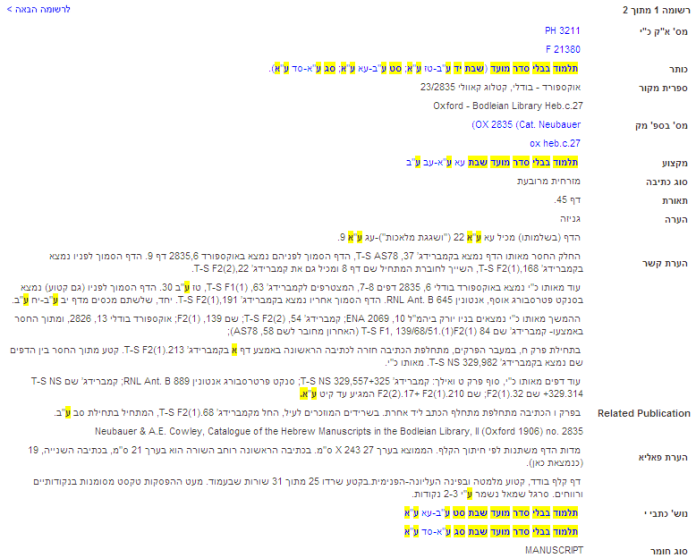 Through the advanced search (“חיפוש מתקדם”) one can even search directly for reconstructed genizah manuscripts. Within “מלים” type “מאותו כי”(make sure you don’t put a quotation mark and write כ”י), and then in the second field select “נושא כתב היד” and enter the tractate or other work that you’re trying to find genizah manuscripts for: 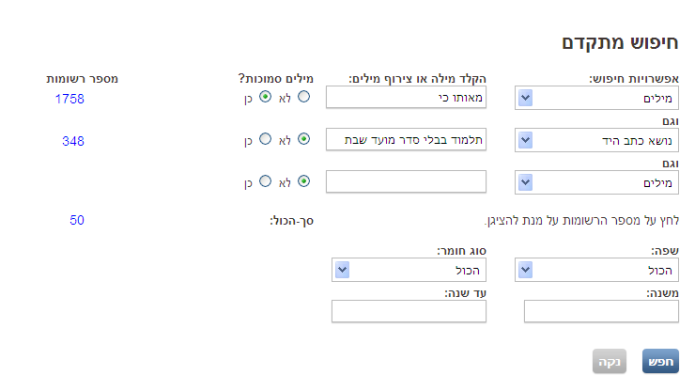 Clicking on the number that appears following the words “סך-הכול” will bring you to a list that also includes reconstructed manuscripts of commentators on the tractate you searched for: 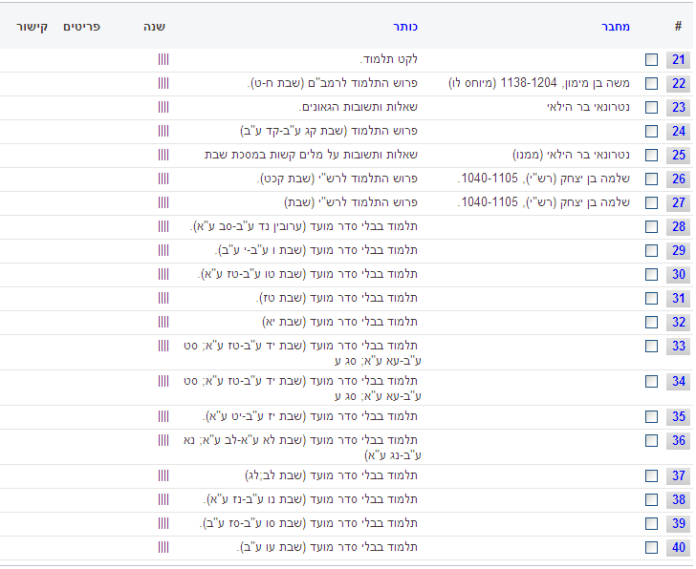 Of course, the catalog is just a catalog, and except for textual witnesses available online (which will be hyperlinked from the results), one must get to a library with a microfilmed manuscript collection in order to make full use of the information obtained.