One of the foundational concepts to emerge from twentieth century linguistics is that meaning is produced through difference. Ferdinand de Saussure’s now banal idea that there is no inherent connection between a particular linguistic sign and the object it refers to was path-breaking at its time. It has echoed across countless intellectual and cultural endeavors which emphasize how the relationship between signifiers and their signified is essentially constructed and maintained only relationally. 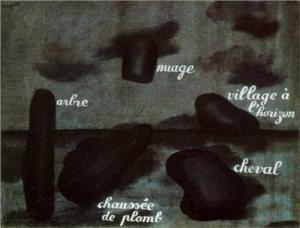 Case in point: Last summer while walking into a cozy  gallery in my favorite place in Hamburg I chanced upon René Magritte’s  bizarre “landscape” painting, The Swift Hope.  The  painting is “about” how words like “tree” conventionally used to designate “a perennial plant” are really arbitrary signifiers that achieve meaning against and alongside related linguistic and visual signs.  The painting successfully communicates because a community agrees that a “tree” is not a “cloud,” “horse,” “road” (of lead?!), or “village” but indeed refers to a class of perennial plants.  Like much of Magrittes’ work, we have here a very serious joke that plays with a big modern idea. The Swift Hope (whatever that means!) winkingly labels the various bulbous objects in the picture so that one visualizes in real-time the hermeneutical circle within which meaning is constructed via a complex interplay between the familiar and the different.

My summer visit to Hamburg and its art galleries took place at a time when my book, The Iranian Talmud, was in that twilight space of having been submitted and even checked but not yet out in physical form. Now, it’s been a few months since publication and I’m feeling reflective. The book’s typeset words and protestant layout, seared into my mind through painstaking editing and endless proofing, are shifting from a more recent memory to one more distant. The precious intimately familiar child is suddenly far way – off to college or, as the case may  be, under review.

The book is part of the great “Talmudo-Iranic” surge – unleashed by my Doktorvater Yaakov Elman  over a decade ago – which has been coursing through rabbinics. I wrote the first four chapters in order to explicitly engage with the Iranian side of the Talmudo-Iranic equation. The bulk of the book describes the various Sasanian textual and material sources that may be relevant to Talmudists and analyzes many of the talmudic passages that directly refer to Iranian words, people, religions, and political realities.  I was interested in highlighting all talmudic matters Iranian and reconstructing  a cultural setting that could explain the presence and dynamic of all these Talmudo-Iranic matters.

Only in the final chapter do I really address the question of how exactly to appreciate the Babylonian Talmud as an “Iranian” Talmud and what this might look  like in practice.  Suddenly I had to admit to what I knew all along: that with all the cute stories about Sasanian Kings and Zoroastrian magi, the vast majority of the Bavli consists of intricate legal Midrash and complex argumentation.  Really, the Bavli is a culmination of classical rabbinic Judaism, and its agenda is largely set by earlier texts composed in Palestine’s Roman/Byzantine provincial milieu.  That said, if we see the Bavli as merely a late displaced iteration of Palestinian rabbinic Judaism with some nice Sasanian trimmings then we fail to appreciate the Bavli for what it, in its entirety, is. Tautologically, in what way is the Bavli the Bavli?

My argument is essentially a literary one. The Iranian Talmud is manifest as a work not simply at those moments when the Sasanian context is cited explicitly, but also – and perhaps especially – in the new utterances of this complex oral heritage now expressed in a Sasanian milieu. This can be witnessed in the Bavli’s subtle adaptation and reworking of its materials. But it must also be appreciated (and then, sometimes imagined) even when the signs of these adaptations are less present yet the sources still resonated differently. The Bavli takes on flesh when, building on the familiar sameness of its rabbinic sources, it charts its path against a brave new and different Sasanian world.

As readers may remember, I’m now working on a new-old project – applying the findings and argument of The Iranian Talmud to my dissertation research on Niddah. I hope to share some more of the yield on the blog soon. Already it has become clear to me that when it comes to thinking about purity  – especially when it takes shape against competing  systems (as was the case with Babylonian rabbinic  and Zoroastrian and Mandaic menstrual rituals) – difference is perhaps the essential grammatical element. Purity comes to make meaning and even define matters of identity because it, too, is about a basic binary distinction – pure and impure, holy and profane, and sometimes, “us” and them”.