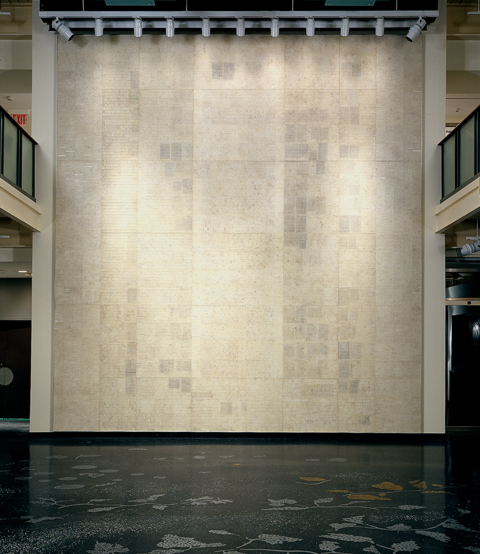 As our readers may have noticed, we’ve recently adapted the blog to WordPress’ new “Twenty Fourteen Theme.” Besides exemplifying  WordPress’ sleek sense of style, the theme caught our eye in that it structures the homepage almost like a daf of Talmud, with the main text in the center and related texts surrounding it towards the margin.

In celebration of The Talmud Blog’s redesign, I have been invited to offer some observations on the layout of the Talmud inspired by my background as a practitioner and scholar of the visual arts. This is a double honor for me as this is also my inaugural post. Thank you for the invitation.

Before it took the form we know today, the Talmud, its various sources, and its standard commentaries were located in separate works. Even in that form references were made in one work to another. We can imagine the medieval scholar pouring over multiple commentaries and talmudic manuscripts open across his desk. Today, contemporary scholarship takes a similar form. Scholars cite journals and books, quote brief passages and restate arguments. Rarely, if ever, are materials included in their entirety. If so, they are relegated to an appendix. The printed Talmud is different; it is a kind of compound text. Multiple works are presented side-by-side as one corpus. This is what I’d like to talk about.

Not too long ago, while the Internet was still a fairly new space, Jonathan Rosen compared it to the Talmud. In The Talmud and the Internet, Rosen made the case that both “texts” were supersaturated with references and internal links. He, like many others, envisioned the “World Wide Web” as being a democratic space where all information was accessible by anyone. Moreover, practically every word could lead to new insights because it was a potential digital link to another page. Today we know that the Internet does not function in this way. The web is quite Balkanized. Readers of Town and Country do not usually find their way to a list of the best high schools in the Philippines.  Social media are interconnected to a high degree while orphan pages lead nowhere. For a lack of a better descriptor, this haphazard connectivity is chunky.

Rosen’s expectation of a smoothly flowing rich corpus was based on certain assumptions and expectations informed by the Talmud. It is, in fact, even more saturated with internal references, “hyperlinks” and paths of inquiry that can be followed simultaneously. Like the Internet, the Talmud can do this because it is a collection of texts. But the efficiency, or rather the unique ability to do it at all, I contend, is made possible because of its layout.

As the reader knows, at the beginning of tractates and some chapters in the standard printed Talmud, the Mishnah takes the dominant position in the upper middle section of the page. It is marked by a header that is similar to a large headline in newspapers referred to as the “wood” (in many manuscripts and some early printed editions, the Mishna is even printed in a particular font size and design). The classical commentaries, Rashi and Tosafot, are printed in a different “semi-cursive” typeset suggestive of marginal notes one might make while reading.[1] But as the Talmud is itself a compound text comprised of previously complete works, the spontaneity of the font – cursive forms are reminiscent of handwritten notes – is a fiction. This fiction informs the relationship between the texts. To some degree the use of two fonts, a formal angular one and a soft round one, suggests the difference between written and oral traditions akin to the relationship between Torah and the oral law. This analogy partially collapses because the Talmud is a codified version of the oral law. So perhaps the cursive suggests something else. To engage in oral debate well, one must have absolute facility with the material. The softer typeface suggests the fluency with which the interlocutor speaks.

A chief complaint by the student is that interpretation is often much longer than the original text. But the Talmudic scholar does not complain. The wanderings are part and parcel of the entire project. Here, these extended exegeses are printed smaller with an eye toward getting more on the page. In fact many run onto additional pages as the conversation continues well past (the length of) the passage. In a similar vein, when subsequent leaves of a daf do not have the Mishnah front and center, it is as if the conversation continues even as one participant has fallen silent for the moment. There is a certain satisfaction when an argument comes to an end and competing opinions have been reconciled – or not. At times this is punctuated by blank space. At others the Mishnah returns to its rightful place in the page. Debate begins again.

There is a common trope that an interpretation is somehow inside or behind the text. Imagine that in a literal way. To fit, the words would have to be much smaller. The smaller font size suggests something like this. I cannot expand on that much further because interpretation has wrestled with it for centuries. Yet, let’s pursue another spatial metaphor. The commentaries wrap around and embrace the center. Their relation to it is clear. They frame, support and present. These terms can easily be used within a rhetorical space. So the layout of a daf is both visual and rhetorical. By putting the large main text in the middle one is constantly reminded of the relationship between the original and its interpretation.

At times this frame is so dense that it begins to crowd out the center. Suppose that it did? Imagine the commentaries flooding over the Mishnah. What would happen? How could the reader see the text again?

Each daf is a bucket. The waters want to overflow in their richness, but the careful reader pushes them aside to see the text written on the bottom.

Ben Schachter is Professor of Visual Arts at Saint Vincent College, and an artist with work shown at Yale University, the Jewish Museum, CoCA Seattle, the Westmoreland Museum of American Art and collegiate galleries across the United States. His blog, Jewish Art Theory, is a blend of art criticism, aesthetics, and Jewish thought.

3 thoughts on “The Flow of Things: Ruminations on Talmudic Layout”