Eyal Ben-Eliyahu, Between Borders: The Boundaries of Eretz-Israel in the Consciousness of the Jewish People in the time of the Second Temple and in the Mishnah and Talmud Period, Jerusalem: Yad Ben-Zvi Press, 2012, 348 pp. $27.

Eyal Ben-Eliyahu‘s Between Borders is the kind of book which deals with such fundamental questions that it makes you wonder how it is that they had not been seriously addressed before.  Based on his 2007 Hebrew University dissertation, the book aims to examine the territorial borders of the land of Israel as reflected in a wide array of Palestinian texts – from biblical books through the Amoraic era – and tries to formulate the different concepts of “Eretz Israel” that these borders represent. 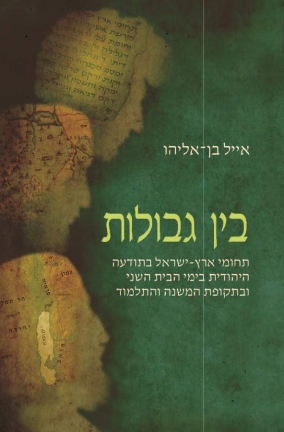 Between Borders consists of eleven chapters. The first includes a theoretical introduction to conceptual borders and cognitive terms of territory. A basic distinction is drawn, based on previous writers, between the concepts of place (“מקום”), space (“חלל”) and area (“מרחב”), and their role in the making of an individual’s “cognitive map.” The author mentions three main elements which influence this cognitive map: 1) Historical memory, based on collective ethos and texts; 2) geopolitical reality;  3) and demographic spread.  In addition, the author questions the relevance of modern terms of nationality in trying to better understand the views of Jewish inhabitants of Palestine in antiquity. At the end of this chapter there is a general analysis of the borders of the land of Israel in the bible and also in Greek and Roman texts.

The rest of the book is divided into two main parts. The first deals with texts from the Second Temple period.  Chapter 2 deals with late biblical books Ezra, Nehemia and Chronicles, as well as the extra-canonical 1 Esdras. The author emphasizes interesting differences that might reflect different approaches to the Jewish population outside Judea by the authors of these books during the period of the return to Zion.  Chapter 3 deals with the Ethiopian book of Enoch (1 Enoch), the book of Jubilees and the Testaments of the Twelve Patriarchs. These books focus especially on the mountain area of Judea, and to a lesser degree, Samaria. Chapter 4 deals with the Book of Judith and 1 Maccabees, and chapter 5 with the difference in focus between the books of Josephus Flavius. Chapter 6 proceeds to the Qumran scrolls, especially the War scroll and the Temple scroll, Syriac Baruch and Pseudo-Philo (Liber Antiquitatum Biblicarum), and Chapter 7 deals with books of the New Testament, specifically, the synoptic Gospels and Acts of the Apostles.

The second part of the book, consisting of chapters 8-10, is dedicated to rabbinic literature of Palestinian origin. In this part of the book the orientation of the discussion shifts from narrative to halakha. Chapter 8 discusses the multi-border definition of Eretz-Israel in Tannaitic literature, which is formulated in the Mishnaic distinction between three territories (“שלש ארצות”) regarding the commandments of shevi’it and halah. This distinction, first articulated in the Mishnah, is based on a historical perspective, as it refers to the land that was conquered by ancient generations – that came from Egypt and from Babylonia (“שהחזיקו בה עולי מצרים, שהחזיקו בה עולי בבל”). This is an extremely important chapter that attempts to identify the exact borderlines of the three territories as they are described in the Mishnah and in the Rehov inscription. Unlike the previous chapters, these texts describe an “actual” map, and reveal their perception of Eretz-Israel directly, placing Ben-Eliyahu’s analysis of the rabbinic geographic and historic identity on firm ground.

Chapter 9 deals with the borders and the special middle-status of Syria and the region east of the Jordan river. Chapter 10, again an important one, deals with the challenging halakhic concept regarding the impurity of the land of gentiles (“ארץ העמים”). Similar to earlier scholars, the author understands this legal concept not as stemming from a concern for unmarked graves in gentile territory, but rather as coming from an ethnic separatist tendency. According to Ben-Eliyahu, claiming that the land of the gentiles is impure is a somewhat manipulative way for the Rabbis to discourage Jews from populating certain geographic areas. At the end of this chapter, in a remarkable comparison, Ben-Eliyahu demonstrates how this concept is ignored, or intentionally blurred, in an assortment of adaptations of Palestinian texts found in the Babylonian Talmud.

In the concluding chapter, the author takes a look at the entire corpus discussed throughout the book, examining the appearances of the names “Judah” and “Israel” (as well as “Palestine”) in the texts as they refer both to the land and to ethnos. Ben-Eliyahu then ties the varied use of these names to larger national and territorial conceptions prevalent in different historical periods.

This book is excellently written, filled with eye opening and useful maps which make the reading even more enjoyable. It is full of thought-provoking texts and discussions, a few of which I will mention here: In the first part of the book, the territorial perspective enables a fresh examination of the geographic origin, or rather orientation, of some of the texts from the Second Temple Period. I found the claim that one may find an overtly Judean orientation in the “Book of Watchers” (1 Enoch, 1-36) especially convincing. Also impressive is Ben-Eliyahu’s analysis of Jubilees’ exegesis of the territorial aspects of the Abraham narrative.

Three points made in the second section of the book that deal with rabbinic literature are of particular importance. The first one relates to rabbinic exegesis. The book beautifully illustrates not only the ways in which rabbinic literature interprets biblical narrative and law, but also the ways in which the basic concept of multi-bordered-territory- a fundamental issue in rabbinic law- derives from biblical and Second Temple literature. Secondly, I found the discussion of the rabbinic concept of  the Babylonian-immigrants’ territory (“ארץ שהחזיקו בה עולי בבל”) fascinating. In it, the author shows, following in the footsteps of S. Lieberman and Y. Sussman, how the texts essentially reveal the historic identities of Tannaitic and Amoraic rabbinic Jews in Palestine. The rabbis saw themselves as the direct descendants of the returnees to Israel from the time of Ezra-Nehemia, and Ben-Eliyahu argues that this outlook should be understood in relation to the rabbis’ own demographic retreat to the Galilee. Finally, the author rightfully distinguishes between two distinct Halakhic concepts – obligations that apply only in the Land of Israel (“מצוות התלויות בארץ”), and the impurity of gentile territory (“טומאת ארץ העמים”). As opposed to what one may think, these concepts do not necessarily compliment each other, meaning that territories could be considered Eretz-Israel according to one, but not according to the other. This observation evokes interesting questions with regards to the social and political motivations behind these Halakhic mechanisms.

This brings me to one slight point of general criticism. Time and again, Ben-Eliyahu asks what motivation lies behind the territorial concepts found in the texts at hand. Sometimes, though, questions such as these should be left open, and it is incorrect to assume that hidden meaning can be found behind every bit of text. Such cases, where the political and social conclusions seem somewhat far-fetched, can be found in the analysis of the end of the book of Judith (pg. 88) and of the function of gentile territory impurity (pg. 252).

Yet even if one can argue with some of the books’ conclusions, the points it makes and the analysis it brings are extremely important for scholars dealing with various sub-periods of ancient Judaism. Between Borders is a thought provoking book, relevant to both scholars of antiquity and modern geopolitics.

Hanan Mazeh is a doctoral student at The Hebrew University of Jerusalem. His MA thesis, which he completed in 2013, dealt with rabbinic interpretations and exegesis of biblical dialogue and speech.