“Pumbedita & Vilna in Silicon Valley” is the title of the opening session in a series of five public meetings at the National Library of Israel. The series aims to investigate the relevance of the Bavli in the 21st century. Baldly, the first session asks: “Is the Babylonian Talmud relevant to the secular-western society in which we live?” As an Israeli Jew, I have to say that I do not live in a “secular-western society.” Yet, I attended this event because it showcased a notable lineup of speakers: Kobi Meidan, Knesset Member Dr. Ruth Calderon, Nobel Laureate Prof. Aaron Ciechanover and the distinguished Prof. Moshe Halbertal. Judging solely from the composition of the crowd, the question of the Bavli’s relevance appears to be of interest primarily to religious people, the elderly, or both.

The event was supposed to start at 8:30PM, but due to some ticketing problems, it was delayed by about 20 minutes. No surprise there, but I was pleasantly surprised to hear Mr. Meidan apologizing courteously for the “unexpected delay.” He then asked if we are willing to wait a bit longer. Displaying an inspiring sense of camaraderie towards the ticketless people below, members of the audience replied loudly with a definitive “no!” Meidan cordially informed the crowd that we would have to wait nonetheless.

The first to speak was David Blumberg, the Chairman of the Board of Directors of the National Library of Israel. He spoke about the “real thirst” that people have for “real culture.” (ANTH 101: from an anthropological perspective, there is no such thing as a real or false culture. There are simply different cultural values, beliefs and customs. ANTH 911: claims and invocations of cultural authenticity are insightful indicators of culturally contingent notions of authority and crisis.) The Chairman went on to discuss the marvelous rise in the numbers of visitors, a quantifiable fact which endows the Library with the status of a “real national library.”

Then came along Knesset member Ruth Calderon. She explicated Bava Metzia 84a and mentioned both Daniel Boyarin and Johnny Weissmuller. And so, the man with one of the most lucid and influential voices of our age finally received much-deserved recognition from a real Israeli institution. Time was running short though, so Dr. Calderon had to hurry through the tragic ending of this homoerotic tale. According to her, this parable warns against the dangers of self-abnegation when attempting to emulate and learn from the other, as is often the case when secular people meet religious people around the Bavli and other sacred texts.

After Ruth Calderon left the podium, Kobi Meidan, Professor Ciechanover and Professor Halbertal took to the stage. Unfortunately, because the stage was set too low, when the three sat down they disappeared from sight. A few older folks began to complain about it, but their protests were washed away by the smooth sound of Meidan’s voice. Fortunately, I was sitting at the end of the row. I left my seat, walked quickly to the flight of stairs leading to the entrance below and sat down on the third step from the top. This was a much better spot. I was not interrupting anyone in the audience because I was sitting beneath their line of vision. I was also positioned close to the stage. From here I could really appreciate the artistry of the biedermeier furniture. Kobi Meidan looked quite comfortable in his armchair, Prof. Ciechanover wore a serious facial expression throughout the evening, and Prof. Halbertal maintained a dreamy gaze. 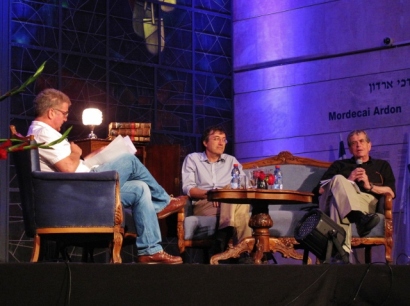 Prof. Ciechanover revealed that his scientific engagement with the Bavli stems back to his days as a young military doctor concerned with the ethical problems of battlefield medicine, such as choosing whom to treat among the wounded. Prof. Halbertal in turn provided his own interpretation of Bava Metzia 84a. Highlighting the sublimation of violence within educational settings, he referred to an insoluble tension between teacher and student: the teacher desires to be challenged by the student, but when finally challenged, the teacher is threatened and desires to destroy the student.

Prof. Halbertal later spoke about an inverse relationship between the authority of the Talmudic text and the flexibility of its interpretive acts. Prof. Ciechanover announced, authoritatively, that science cannot be interpreted because science is not a product of human beings. Kobi Meidan mentioned Karl Popper and Prof. Ciechanover discussed the unparalleled ethical challenges that are rapidly emerging from new scientific frontiers, like genetic mapping. What should be done, for instance, with knowledge about a foreseeable end? Prof. Ciechanover is convinced that the Talmud contains answers to such perplexing ethical dilemmas.

The evening also featured a short comical show. It depicted secular-religious dynamics in the Beit Midrash. The audience seemed to like it, and so did I, until a security guard informed me that I needed to return to my seat. I told him I cannot see anything from over there and he said I cannot sit on the stairs. I argued that going back to my seat would interrupt the show more than my presence on the stairs could. He consulted a senior personal, and I was ordered to leave the stairs. I ended up sitting on a long wooden bench at the back of the hall, the public restroom to my right, the stage now entirely hidden from sight. A maintenance man was resting on another bench behind me. He spoke in Arabic over the phone.

When the event was over, I was left with a desire to know more about the relevance of the Bavli to our contemporary realities.

Assaf Harel is a PhD candidate in Anthropology at Rutgers University. He conducted ethnographic research among Israeli settlers and Palestinians and writes about Jewish concepts of time and their relations to settlement practices.

5 thoughts on “Meeting the Bavli at the National Library: Notes from an Uncultured Anthropologist- Guest Post by Assaf Harel”