With my book, The Iranian Talmud: Reading the Bavli in its Sasanian Context (Philadelphia: University of Pennsylvania Press) in production and due out later this year, I have finally been able to return to research I first conducted for my dissertation, which looked at the rabbinic laws of menstruation in light of Zoroastrian parallels. I hope to use the space of the Talmud Blog to think “out-loud” through some of the issues – large and small – that I suddenly find myself confronting as I turn this project into a book.  What I will be presenting are readings, meditations about gender, and (formerly) personal thoughts connected to the larger questions of meaning that one is not really “allowed” to ask in academic discourse. I hope readers will indulge me this virtual confession booth, and that you will chime in with your thoughts and reactions along the way. 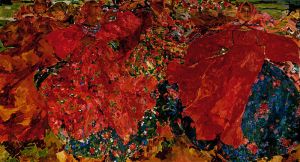 Writing in the humanities is a consciously aesthetic form of expression. Yes, the register is critical, even “scientific.” But the truth is that most scholars study people and their cultural productions because humankind is at heart, beautiful and tragic, and ultimately, tragically beautiful. When the charity is absent, the writing does not just fall flat. It bubbles with a venom and scalds the reader.

What happens when the beauty of a certain facet of humanity – especially a religious phenomenon – comes off as unsavory and even disgusting to nearly everyone but the scholar who is totally devoted to its study?  I carried this heavy feeling with me while writing my dissertation on the rabbinic laws of menstrual impurity in light of corresponding Zoroastrian texts.  Why menstruation? Why impurity? Why gender politics and strange Zoroastrians, and the darkness of Babylonia, the distances between men and women, and particularly, the messiness of niddah with its rags, spotting and colors?

I recently came across a poignant midrash that I must have learned before yet it somehow never really registered. The text speaks foremost of the ever-relevant conundrum of finding something meaningful to say when the wellsprings have all dried up. I am sure it still speaks to contemporary rabbis racking their brains for sermon ideas during the harsh winter Sabbaths of Leviticus.

R. Shimʿon b. R. Yitzḥaq explained the verse [“(His locks are…) black as a raven” –Song of Songs 5:11] as referring to portions of the Torah.  Even though they can seem as if they are ugly, as if they are too black to discuss in public – for example the laws of discharges and skin diseases – the Holy One blessed is He said: “They are pleasing (ʿarevot) to me”.  This is what is said: “Then the offerings of Judah and Jerusalem shall be pleasing (ʿarvah) to the Lord” (Malachi 2.15). You should know that this really is true. For the portion dealing with the zav and zava were not said as one, rather this one by itself and this one by itself: “When any man has a discharge issuing from his member” (Leviticus 15:2); “When a woman has had a discharge of blood” (Leviticus 15:25).

Leviticus Rabbah is a homiletical Midrash, which according to one school of thought means that – even if only very distantly – it reflects a form of public discourse that took place in the quaint synagogues of late antique Palestine.  One can almost see R. Shimʿon b. R. Yitzḥaq struggling mightily to find some comforting message for local synagogue attendees as they read Leviticus 15, with its bloody and seminal discharges.  In frustration, he nearly admits that these parts of the Bible are nothing short of revolting – they are as “black” as a raven.

The genius of this passage is the way it non-judgmentally establishes a distinction between human and Divine aesthetics, yet at the same time questions the validity of the human view. The passage turns on the modifier “seem” and the question of aesthetic “truth.”  In rabbinic aesthetics, black is seen as unattractive. Yet this beauty judgment is simultaneously turned on its head. The classical interpretation of the Songs verse “I am black but beautiful” is not far from “black is beautiful” since it calls into question the original aesthetical claim that black is not beautiful.

It is just as difficult to talk about hideous skin diseases, various bodily functions, and their governing rituals today as it was in the fourth century C.E. – although the reasons for this, in a secular age, may be different.  Even in late antiquity there were rabbis who wished that Leviticus 15 was shorter (something not too difficult to achieve, given its chiastic structure of a. irregular male discharge; b. regular male discharge; a’. regular female discharge; and b’. irregular female discharge). Yet God is depicted as lovingly lingering over the very topics that humans prefer to rush through. The message of this midrash is that human revulsion at menstruation is understandable, but ultimately misguided and immature. God is able to recognize the beauty of these topics which people incorrectly see as “black.” Of course the midrash does not suggest how one is to gain an appreciation of the “pleasing” nature of menstruation.

There has been much writing about the laws of Niddah since the feminist turn in Jewish studies (which I suppose dates back to the 1970s). Some of the scholarship is apologetic, some openly hostile, and while some succeeds in striking a balance of sorts. I suppose the fact that these laws were – and remain – profoundly meaningful sites of religious experience for many women (and men?) should somehow lead the way to seeing its beauty.  Even if the writing must be critical, and the male power-plays not shoved under the rug, there must be a way to achieve a beautiful, productive sympathy.

19 thoughts on “Black Like a Raven: Menstruation and Aesthetics”