Amidst much fanfare, immigration lawyer and daf-yomi class teacher Daniel Retter published his index of the Babylonian Talmud, dubbed HaMafteach in both Hebrew and in English. As someone who often studies Talmud on the Sabbath and misses the various digital search engines while doing so, I fit the New York Times’ profile of someone who may want to purchase a copy. At 65 NIS, the price was right, but I would have to wait for the book’s second printing until I managed to get a copy from my local seforim store.

Despite the fact that the book overlooks its predecessors, the volume is indeed impressive, and the author is clearly a talmid chacham who put countless hours into it. When reading the introduction I was particularly struck by one aspect of the book that I don’t think has received that much attention so far. Retter writes that the index is not one of words, but of ideas. In order to explain the importance of sifting through Talmudic sugyot thusly, the indexer cites the example of “pidyon haben“- which in one important discussion in the Talmud is refered to as “yeshua haben” (BK 80a). Needless to say, a casual search via an electronic database for “pidyon haben” would fail to turn up this source, and the importance of organizing the index by ideas is felt.

In some- if not all- cases, this organizing principle can get rather subjective and even problematic. For example, the phrase “mitzvah haba’ah b’aveirah” comes up three times in the Vilna edition of the Bavli, at Ber. 47b, Suk. 30a and BK 94a (certain MSS also have it at Suk. 35a), yet the Mafteach cites five sugyot: the three sugyot in which the phrase occurs, and then two sugyot in which a similar concept is supposed to emerge – San. 6b and Meg. 32a.

In actuality, these cases are cited because they are parallels. The Sugya at San. 6b parallels the BK sugya- both discuss one who “steals a seah of wheat, grinds, bakes it, and separates from it hallah“. Part of Meg. 32a is indeed paralleled in the sugya at Ber. 47b, but not in a way that seems particularly relevant to mitzvah haba’ah b’aveira (based on the Soncino translation):

The bold lines show why these sugyot were brought together. Both deal with why “someone receives the reward of all of them”, but only the one in Berakhot includes a discussion of mitzvah haba’ah b’aveirah. My guess is that the sugya from Megillah was cited not because of its direct relevance to our topic, but rather, because of a somewhat cluttered reference area in the Mesorat haSha”s on our page from Berakhot: 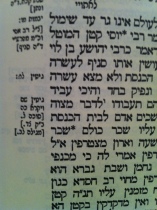 The indexer seems to have relied, at least in this case, on the references found in the Mesorat haSha”s. Working with “ideas” can be tricky business…

My immediate reaction to Retter’s organizing principles was one of surprise. While reflecting on that reaction of mine, I came to consider the rules that govern my own decisions with regards to which sugyot of the Bavli I choose to bring into discussion with one another. Philology, the love of words, has a tough time utilizing ideas, often deemed too subjective, in study and in text-editing. From the other end of the toolbox, one could argue that at least since De Saussure language has often been the grounding for Theory, leading, therefore, to an emphasis on words.

Both the philological and theoretical modes of reading may have instilled a stronger focus on words, but more importantly, current search-engines are really what have been changing the way we approach the bavli. “Change”, because whereas Bar-Ilan, Ma’agarim, the Lieberman database (and still other computer programs) use words, generations of Talmud readers, have, like Retter, used other aspects of the Talmud to decide which sugyot are speaking to one another. To be sure, the virtues of the electronic revolution are numerous. Search engines have allowed corpora like the Tosefta, Midrash Halakha, and the Yerushalmi to enter into discussion with greater ease. But which sources have we lost along the way?