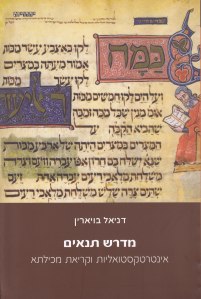 Last spring, future Talmud blog contributors and other Jerusalemite students of Rabbinic literature were lucky enough to spend a delightful evening with Prof. Daniel Boyarin, discussing Carnal Israel from the hindsight of twenty years. Prof. Boyarin had scheduled his trip to Israel for the release of a translation of his earlier work, Intertextuality and the Reading of Midrash in Hebrew. Little did we know that only a few months later some of us would be collaborating on a web log. Nor did we fully understand how long we would have to wait for the release of Midrash Tanaim: Intertextualiut viKriyat Mechilta (Hartman, Alma, and Keter 2011).

Truth be told, now that the volume is in my hands, the time spent on its preparation (and its strange recall by the publisher after its initial release…) seems to have been well spent. I only purchased it a few hours ago but I’ve already started plowing through the two new chapters Prof. Boyarin wrote for the Hebrew edition: “Midrash as Anti-Philosophy” and “Rhetoric, Theology and Allegory in Paul and Origen”. Both seem to offer authoritative summaries of some of Boyarin’s scholarship since Intertextuality‘s English release in 1990. Another chapter by Ishay Rosen-Zvi provides an overview of the affect that Boyarin has had on research into Rabbinic literature- “What is Left to Interpret? Thoughts on Boyarin and his Footsteps”. These chapters add significant value to the book, but its main contribution is no doubt the way it makes Boyarin’s scholarship accessible to the Israeli reader. Boyarin has still left plenty of writings to translate, and I hope that we’ll soon see translations of other works of his as well. You can hear Boyarin and other scholars (Menahem Kahana, Galit Hasan-Rokem, Joshua Levinson, and Dina Stein) discuss the book at the Shalom Hartman Institute on November 27 at 8:30pm.